Water scarcity in the United States has been in the news for years. Many of us have read gripping news stories about raging wildfires, record temperatures, withering crops, and water restrictions — or perhaps experienced some of those effects firsthand.

But what’s the status of the drought today? What happened to the usual water sources, what might the future look like, and what can we do to help? What do recent scientific studies tell us about potential water shortages now and in the future, and what areas will likely experience the most severe impacts? Let’s take a look.

We Are Running Out of Water


The United States is currently experiencing a water crisis that spans several states. California is perhaps the state historically best known for its punishing, ongoing drought conditions. Still, other states experience drought as well, and severe drought has shifted to many of those states in recent years. Much of the country's western and southwestern regions are in conditions of moderate to extreme drought, and many states have been feeling the effects of drought for several years.

Scientists have recently sounded the alarm about intensifying water scarcity in a study performed as part of the U.S. Forest Service's latest Resources Planning Act (RPA) Assessment. It reports that within the next 50 years, many parts of the United States could see their freshwater supplies shrink to just a third of their current size.

According to the study, the United States has 204 freshwater basins that supply water for human use. Current projections show 96 of them will soon face shortages. As a result, by 2021, half of the freshwater sources we rely on for everything from cooking, drinking, showering, cleaning, and washing clothes will be unable to keep up with our demand.

Significant water shortages will result. These shortages would blanket several areas of the United States, including parts of the Great Plains, the South, the Southwest, the Midwest, the Rocky Mountain states, and California.

While 50 years may still seem far away, the danger is approaching quickly. In 83 of those 204 basins, substantial shortages are projected to occur much sooner, between now and 2045.

The prospect of extreme water scarcity in the not-too-distant future is cause for concern. Meanwhile, the present scenario is also troubling and speaks to the need for redoubled water conservation efforts.


The National Drought Mitigation Center at the University of Nebraska–Lincoln, in partnership with the National Oceanic and Atmospheric Administration (NOAA) and the U.S. Department of Agriculture (USDA), has created the U.S. Drought Monitor to map drought conditions across the country and keep drought records and U.S. water shortage maps from past years.

The NOAA classifies drought according to severity. From most extreme to least extreme, the categories include exceptional drought, extreme drought, severe drought, and moderate drought. Areas approaching moderate drought conditions receive a classification of "abnormally dry."

Drought has been expanding over the past several years. As of midsummer 2015, severe drought  remained concentrated largely in the western strip of the country, with exceptional drought conditions covering much of central California and western Nevada. Extreme drought extended over parts of California, Nevada, Oregon, Washington, Idaho, and Montana, and severe drought pushed into Utah and Arizona, as well as pockets of the southern and southeastern states.

More recent maps of states with water shortages show serious drought conditions having expanded well to the east. Though exceptional and extreme drought conditions have eased, drought has now spread across much of the western and south-central United States, from Washington in the northwest to western Texas and Oklahoma in the south.

In the discussion below, we'll rank a few drought-prone states in the rough order of their current drought severity and discuss what impact local drought conditions have had on those areas.

Because of the drought, many farmers struggle to pay bills, and cattle ranchers must spend extra money to supplement their dry grazing lands with additional feed. Wildfires are also becoming more frequent and extreme.


Drought has blanketed the majority of New Mexico, with extreme conditions in the northern and southeastern parts of the state. An  unusually light snowpack and a milder-than-average monsoon season have contributed to the dry conditions that affect 95% of the state's population.

Because of the drought, New Mexico has experienced lower river levels, which hamper recreational activities. The drought also raises the prospect that the Rio Grande will be unable to supply the necessary water to Santa Fe and Albuquerque residents and force these cities to switch to their backup wells.


Drought has covered much of Oregon, with extreme and severe drought affecting much of the western and central portions of the state —  50% of the land area. Higher temperatures and lower precipitation levels than usual have led to a smaller snowpack and lower soil moisture levels and streamflows.

The drought has reduced irrigation allotments for farmers and increased the likelihood of wildfires. It has also stressed the vegetation, increasing susceptibility to insect damage and reducing grazing land for livestock, especially in the Coquille, Deschutes, Klamath, Rogue, and Umpqua watersheds.


In Utah, drought covers all but a tiny northwestern corner, with extreme and severe drought pervasive especially in the southern and central portions of the state. Lack of precipitation since last fall, higher-than-normal temperatures, and a rapidly melting snowpack have contributed to the drought, which has affected  97% of Utah residents.

Because of the drought, soil moisture in Utah is  holding at 28%, down from 68% last year. Reservoir storage has also dropped to 68% of its capacity. These effects have led to water shortages and crop and pasture damage.


Drought in California has eased in recent years, but arid conditions, including extreme, severe, and moderate drought, still reign in the north, affecting just over  50% of the state's land area. This winter, northern California had its driest February since 1864, and the Sierra Nevada snowpack, which supplies a third of California's water, reached merely 46% of its historical average.

The ongoing megadrought in much of California has increased fire danger, dried up farmland, caused crop shortages, killed trees, and forced the adoption of ordinances limiting water consumption.


Western Texas has seen worsening drought in recent years, with patches of extreme, severe and moderate drought widespread there and into the panhandle. Short-term drought has also reached central Texas. Forecasters have warned that conditions could worsen, predicting the possibility of unprecedented  10-year megadroughts.

Whereas 2019 brought rainy weather to Texas, 2020 has seen a rainfall shortage that has worsened  crop, pasture, and rangeland conditions across 34% of the state.


Much of Nevada is experiencing drought, with extreme and severe conditions prevalent in the central and western areas. The drought, caused in part by modest snowpack, has affected  58% of residents in the state, lowering water levels and increasing the risk of fire.

The Next States to Develop a Water Crisis


Which states will be next to develop water crises? Though we can't know for sure, looking at current maps and projections can give us a reasonably accurate indication.

Recent NOAA and U.S. Drought Monitor maps show particularly abnormal dry conditions and patches of short-term drought across much of New England, New York, Pennsylvania, Ohio, Indiana, and Wisconsin. Along with Oklahoma and Texas, plains states like Iowa, Nebraska, North and South Dakota, Kansas, and Missouri have also seen areas of significant aridness and drought. If temperatures continue to rise, precipitation decreases and water shortages continue, these regions could potentially see full-blown, entrenched drought within the next few years.


Even though drought often seems to be a West Coast phenomenon,  the Northeast and Southeast represent areas of particular concern. Much of New England — including Maine, Vermont, New Hampshire, Massachusetts, and Connecticut — is experiencing patchy areas of moderate, short-term drought, as are states like New York, Pennsylvania, and Virginia. If these conditions persist and expand, they could lead to extended periods of significant drought as well.

Will We Ever Run Out of Water?


We could run out of water. The amount of water on earth doesn't change, but our consumption habits and global climate patterns do, and shifts in these areas can affect how much water is available for use.


Human-made water stress comes from our consumption patterns and climate change. Increased fossil fuel consumption over the past decades has created a barrier of greenhouse gases in the atmosphere. These greenhouse gases, so called because they mimic the thermal properties of glass, are permeable to the ultraviolet radiation coming to earth from the sun but impermeable to the infrared radiation that the planet's surface emits back as heat. Instead of allowing this thermal radiation to escape harmlessly into outer space, carbon and other gases trap it in the atmosphere, effectively warming the earth as these gases build up over time.

The resulting climate change has caused  shifting rain patterns, led to fluctuating ocean and land temperatures, and increased extreme weather events such as storms and drought.


Natural droughts occur when cyclical weather patterns cause periods of greater and lesser rainfall. The natural climate patterns of  El Niño and La Niña, for instance, are notorious for changing ocean temperatures, winds, surface pressures, and rainfall and drying out the western United States every few years.

How Can You Help Conserve Water?


Fortunately, you can do your part to help preserve water. If we all pitch in, monitor our water usage, and conserve where we can, we can help alleviate drought in vulnerable states. Below are a few tips for how you curb your household water use and help prevent water scarcity:

In the bathroom, you can help conserve water by following some of these steps: 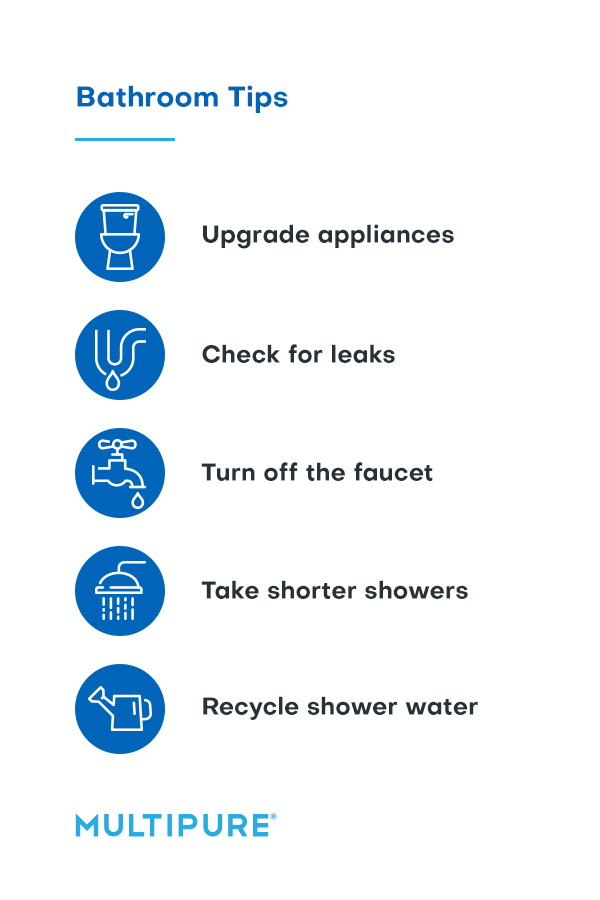 
In the kitchen, try using some of these tips to conserve water:


With your garden and other plants, here are some ways you can help conserve water:

As consummate water professionals, we at Multipure take a keen interest in water scarcity around the country. To learn more about drought and other water issues or explore the variety of  drinking water systems and home essentials we offer, follow our blog, or leave a comment to get in touch.

Reach out today to join the conversation.