Lead is a metallic element that can make its way into groundwater through metallurgical or industrial waste. Lead can also make its way into drinking water when the lead solder, lead pipes or brass fittings in your plumbing system corrode or deteriorate.

How Does Lead Exposure Occur?

Lead exposure typically occurs through the ingestion of contaminated drinking water. Lead exposure can also occur through prepared foods, which can contain small but significant amounts of lead. Lead content is increased when the water used for cooking or the cooking utensils contain lead. Food – especially acidic foods – that have been stored in lead-ceramic pottery or lead-soldered cans can also become contaminated with lead; this case is becoming less common as the use of lead-free solders becomes more widespread in the food processing industry.

How Do You Find Out If There Is Lead in Your Drinking Water?

How Does Lead Get into Drinking Water?

How much lead enters the water is related to several factors, including:

Although lead in water can come from homes with lead service lines that connect the home to the main water line, even homes without lead service lines may still have brass or chrome-plated brass faucets, galvanized iron pipes, or other plumbing soldered with lead. Drinking water fountains with lead-lined tanks, as well as other plumbing fixtures not intended for drinking water (e.g., lab faucets, hoses, spigots, hand washing sinks, etc.) may also contribute to lead in the water.

In older homes - particularly homes built prior to the 1930s – lead was used to make the piping and/or solder. These pipes can be identified because the piping tends to have a dull gray color, can be scratched with a key, and a magnet will not stick to the piping. In buildings built between the 1930s and early 1980s, copper pipes were often used, but the solder still contained elevated levels of lead. In the 1950s and 1960s, galvanized water lines were utilized in new home construction; galvanized pipes utilize steel pipes with a zinc coating to reduce corrosion, although they are currently only used with well water applications. Although older homes tend to be more susceptible to lead contamination through the plumbing, this does not mean that a newer home is safe from lead contamination. Data suggests that even recently-built buildings can have high levels of lead; prior to 2014, the legal definition for "lead free" was plumbing fixtures with a lead content of less than 8%. In 2014, the term was redefined to include only fixtures with a lead content of 0.25%; while newly installed fixtures must use the "lead free" materials, this does not apply to fixtures already in use.

Why Do I Need a Lead Water Filter?

Lead is an extremely toxic chemical that can damage your brain, nervous system, and kidneys. Lead exposure in children can lead to permanent brain damage and learning disabilities. Although the action level for lead in drinking water is 0.015 mg/L, ideal drinking water should be lead-free. This is why it is vitally important for everyone to have a lead water filter for their home. 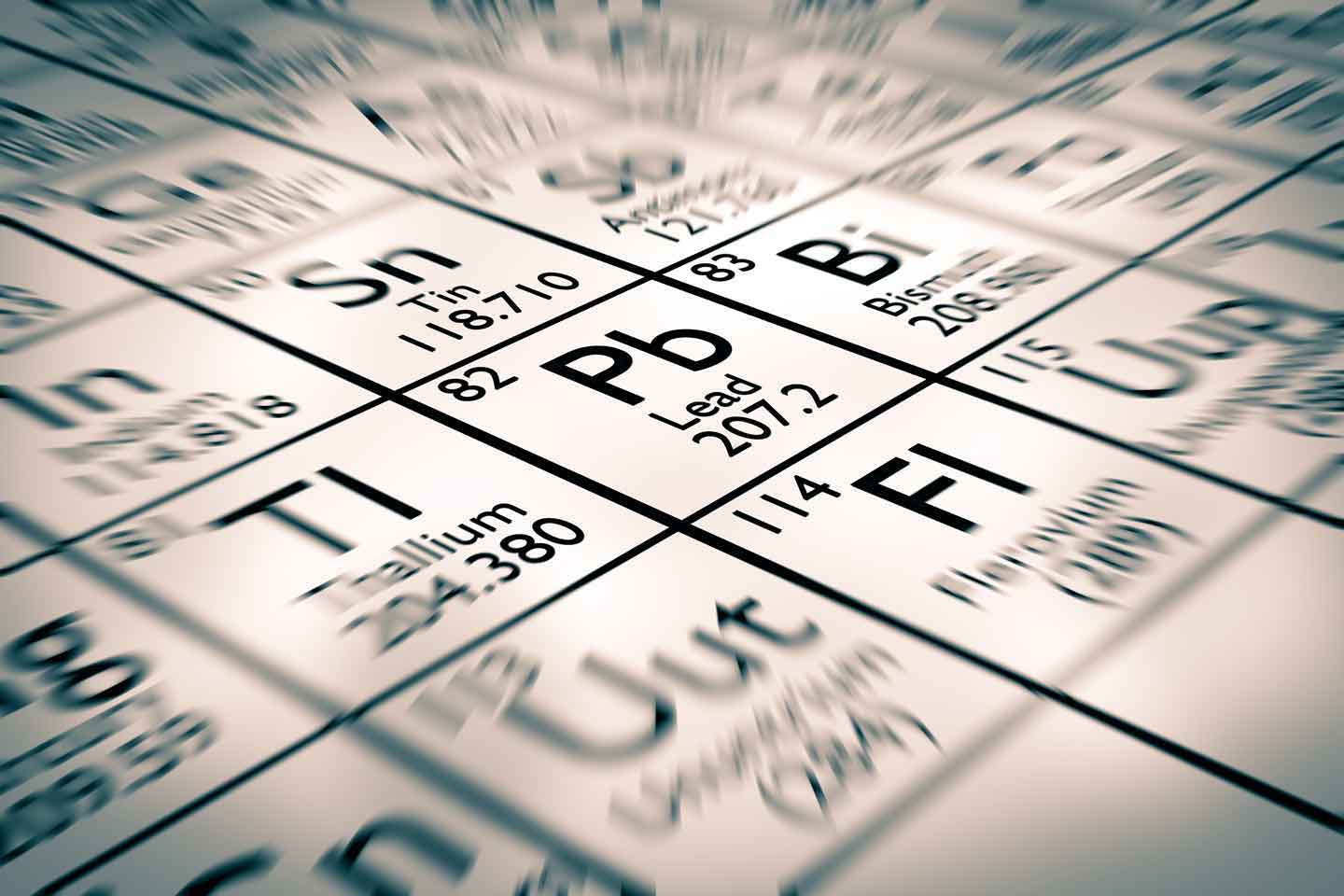 What Are the Health Impacts of Lead Exposure?

Lead is a toxic metal that is harmful to human health; as such, there is NO safe level for lead exposure. The degree of exposure depends on the concentration of lead, route of exposure (air, water, food), current medical conditions, and age. It has been estimated that up to 20% of the total lead exposure in children is due to the consumption of contaminated water. In addition, infants, fetuses, and young children are particularly vulnerable to lead poisoning, as they consume more water in general, and because their bodies are actively developing.

The U.S. Environmental Protection Agency (EPA) has set the maximum contaminant level goal for lead in drinking water at zero, because lead can be harmful to the human body even at low exposure levels. Lead accumulates in the body over time (i.e., bioccumulation) - generally within the brain, bones, kidneys, and other major organs – so exposure builds up the risks and harmful effects. Risk will vary depending on the individual, the chemical conditions of the water, and the amount consumed. For example, infants who drink formula prepared with lead-contaminated tap water may be at a higher risk of exposure because of the large volume of water they consume relative to their body size. Bathing and showering are relatively safe in comparison, because human skin does not absorb lead in water.

In children, even low levels of lead exposure have been found to permanently impair cognitive ability and cause hyperactivity. Moderate levels of exposure may result in hearing loss and stunted physical development. High levels of lead contamination in children can result in convulsions, major neurological damage, organ failure, coma, and ultimately death. What is particularly worrying is that there may be no signs of lead poisoning, or the signs could mimic a flu or other gastrointestinal disease. Symptoms of lead exposure may include cramps, irritability, fatigue, vomiting, constipation, sleep disorders, and poor appetite. Lead contamination can be stored in children’s blood for months, and stored in bones for many decades. Some of the effects of lead poisoning cannot be cured, but it is possible to reduce exposure to lead.

Pregnant women are also extremely vulnerable to lead exposure, which can reduce fetal growth rates, cause premature birth, and even cause miscarriage.

After one to two years of lead exposure, signs of lead intoxication include muscle weakness, gastrointestinal symptoms, lower scores on psychometric tests, and disturbances in mood. There are indications of increased hypertension at higher blood lead levels, particularly among adults aged 21-55 with existing high blood pressure symptoms.

Lead has also been shown to interfere with calcium metabolism, both directly and indirectly. This has been demonstrated in children with even low levels of exposure to lead contamination. Tissue lead content is also increased in calcium-deficient persons, and it has also been demonstrated that interactions between calcium and lead were responsible for a significant portion of the variance in the scores on general intelligence ratings.

Several lines of evidence demonstrate that both the central and peripheral nervous systems are the principal targets for lead toxicity. The effects include neurological and behavioral effects in adults as well as children. Children aged 5-9 with moderate lead exposure demonstrated significant reductions in motor skills, and data suggests lead toxicity as a cause for reduced hearing ability in children aged 4-19. Additional data also suggests that blood lead levels are significantly associated with slower infant developmental abilities, e.g., sitting up, walking, and speaking.

The carcinogenic effects of lead in humans has been examined in several epidemiological studies, which have generally demonstrated a minimal correlation between lead exposure and cancer. In most of the studies in which some form of correlation existed, there were either concurrent exposures to other carcinogenic agents, or other confounding factors such as smoking that were not considered. A study on 700 smelter workers (average blood lead level of 79.7 µg/L) and battery factory workers (average blood lead level of 62.7 µg/L) indicated an excess of deaths from cancer of the digestive and respiratory systems, the significance of which is undetermined. In a study on lead smelter workers in Australia, no significant increase in cancers was seen, but there was a substantial excess of deaths from chronic renal disease. The International Agency for Research on Cancer (IARC) considers that the overall evidence for lead as a human carcinogen is inadequate, but that inorganic lead compounds are probably carcinogenic to humans.

How Can You Protect Yourself from Lead Exposure in Your Drinking Water?

A step further than looking up your CCR is to have your water tested. If you are concerned about lead in your water, you can test for lead and other contaminants. Some water systems will even provide lead testing resources for their customers. Others will provide information on local laboratories and other resources. There are also tests available for consumer purchase and use.

A simple tip to protect your water from lead contamination is to run your water before drinking, washing foods, or cooking. The longer water sits in pipes, the more lead it may contain. When water has not been used for 6 hours or more, running water for even just 1–3 minutes until it becomes cold can help ensure you are not using water that has been sitting in the pipes. This is especially important for water consumption by and for children, such as water used for baby formula. If you are concerned about water waste, the unused water can be used for watering plants or other non-consumption uses.

Note that boiling water will not remove lead. Lead is a heavy metal, and as such will not be destroyed or vaporized by boiling the water. In fact, boiling water will actually serve to increase the concentration of lead, as the total water level will decrease while the lead content in the water will remain the same.

Finally, utilize a lead water filter for your home and family. It is important to choose the right filter, though, because only specific water treatment products are engineered as a water filter that removes lead. If you choose to use drinking water filters for lead, make sure that they have third-party testing and certification – preferably by the premier authority in drinking water treatment certification, NSF International.

How Does Multipure Offer Water Filters that Remove Lead?

Multipure products have been filtering water for over 50 years. A Multipure carbon block filter reduces lead and other contaminants much more effectively than a typical pitcher-style or stand-alone faucet water filter, due in no small part to Multipure’s proprietary activated solid carbon block technology. Activated carbon filtration is known for its lead reduction capabilities in water, and Multipure's solid carbon block serves as the core behind each lead water filter system.

Multipure’s lead reduction filters remove lead through a combination of mechanisms including mechanical filtration, physisorption, chemisorption and catalysis. These mechanisms not only filter for lead removal, but also filter other contaminants like asbestos, cysts, particulates, mercury, PCBs, radon, toxaphene, and chlorine.

Multipure's Aqualuxe, Aquaperform, Aquaversa, and Aquamini drinking water systems are NSF-certified according to NSF/ANSI Standard 42 (Aesthetic Effects, e.g., chlorine and chloramine) and Standard 53 (Health Effects, e.g., lead, disinfection byproducts, and VOCs) for the reduction of dozens of contaminants. NSF certification offers the highest level of assurance of quality, and its testing and certification states that our lead water filter systems perform exactly as claimed. NSF certification is a sure sign that a Multipure system or replacement filter can improve your water.