Water makes up about  71% of the world's surface area. The continual cycle of evaporation, condensation, and precipitation means the Earth's stores of water may change shape, but will never disappear. Despite this abundance, the availability of water suitable for human use is another matter. Increasing demand for water and the resultant strain on our finite available water resources have combined to contribute to the threat of water uncertainties around much of the world.

The Uncertainty of Water Supplies and the Increased Demand for Water


Water is an essential resource, and it is also non-renewable. If not managed appropriately, clean water supplies will diminish. As global temperatures rise every year and urban populations swell, a lack of potable water has led to water scarcity worldwide.

Fourteen of the world's  20 largest cities have experienced water shortages in the past few years. In 2018, Cape Town, South Africa — home to more than 4 million residents — came perilously close to exhausting its water supplies. Other cities like Mexico City, São Paulo, Brazil, and Barcelona, Spain, have undergone similar shortages. India may have only five years to solve its mounting water crisis before it becomes so severe that it endangers citizens' lives. In the United States, California has experienced extended periods of drought that necessitate water rationing and pleas for personal conservation measures.

If water covers so much of the Earth, why is clean water in such short supply? Most of the Earth's water is ocean water, which is far too salty for drinking or irrigation. Only  3% of the world's water is fresh. Of that freshwater, much is unavailable for use. About 68% of our freshwater is frozen solid in glaciers and ice caps, and another 30% is groundwater that may not be readily accessible from the Earth's surface. The rivers and lakes that supply much of the world's water constitute only about 1/150 of 1% of the Earth's total water volume.

Because comparatively, little freshwater is available for human use, it is a resource we must conserve and apportion carefully. Yet demands on our water supplies continue to grow as the world population swells and climate change sends temperatures soaring. Water scarcity will likely be the inevitable result.

What Is Water Scarcity?


Water scarcity is defined as the point at which a water supply cannot satisfy the needs of everyone who relies on it for water. This issue already affects every continent, and in the past century, the rate of water scarcity growth has climbed at  more than double the rate of the human population growth.


The United Nations (UN) quantifies water scarcity as an annual water supply of below  1,000 cubic meters per person. That works out to about 723 gallons of water per person per day. This number may seem like a lot, but it must cover drinking, bathing, cooking, cleaning, and the water a person uses indirectly for electrical, industrial, and agricultural needs. The United Nations defines absolute water scarcity as a limit of 500 cubic meters per person per year. If a region is approaching water scarcity but has not yet reached the threshold, it is said to experience water stress.

Projections and Impact of Water Scarcity


Predictions indicate that by 2025, 1.8 billion people will be living in regions that experience absolute water scarcity, and up to two-thirds of the global population is likely to experience conditions of water stress. UN projections also suggest that by 2030, if the rate of climate change continues unchecked, almost half the world's population will be living in areas of extreme water stress, and water scarcity will displace between 24 million and 700 million people worldwide.

Why the Demand for Water Has Increased


The world is currently experiencing more water scarcity issues than ever before. Here are a few of the reasons for the increasing demand for water:


The global population has increased steadily over the past few decades, from about 2.5 billion people in 1950 to about 7.8 billion people in 2020. One current model, created by a Pew Research Center analysis of UN data, suggests that the human population may top out in 2100 at  about 10.9 billion.

As the population grows, the increasing amount of people requires more and more food. The World Bank reports that with the global population projected to rise to 10 billion, and with people in developed countries consuming more calories and complex foods, agricultural production will have to  expand by 70% through 2050 to provide enough food for everyone in the world.

Irrigation for agricultural operations requires thousands of gallons of water. Currently, about 70% of the world's freshwater goes toward agricultural production. As demand for food increases, the strain on the world's water supply will increase as well, potentially draining critical water resources that communities depend on for drinking and other personal needs.


Energy demands may also claim a growing share of our finite water resources. The UN reports that  90% of the world's power generation relies on intensive, non-reusable, and unsustainable water models. Projections also indicate that by 2050, global water demand will increase by 55%, primarily because of the manufacturing sector, which is likely to increase its water demands by 400%.

Much of the global energy supply comes from fossil fuel production, an incredibly water-intensive process. Extracting petroleum uses large volumes of water to lubricate and cool drills and remove debris from the work site. The refining process requires water as well. Coal mining uses water to cool equipment surfaces, prevent coal dust from catching fire, and reduce the risk of explosions. Power plants use water for cooling, and even biofuels need water to grow the initial crops. Hydrofracturing, or fracking, works by injecting large volumes of water and chemicals into the ground to create cracks for accessing oil and gas.

To minimize water usage while satisfying energy needs, nations around the world may need to turn to alternative sources like solar, wind, and geothermal power.


As the Earth's climate warms, one consequence is changing weather patterns. Severe storms are more common in many areas, and rising temperatures and lack of rainfall make drought more common in others.

How does climate change contribute to drought? Higher temperatures increase the rate of water evaporation from the soil, so periods of low precipitation become even drier than they otherwise would be. A cycle known as  positive feedback can then cause drought to persist. Positive feedback occurs when arid soils and depleted plant cover contain no water to evaporate, so the area receives less rain than it would under standard climatic conditions.

Around the world, similar occurrences are taking place. The National Aeronautics and Space Administration (NASA) predicts continual cycles of drought and flooding. All 17 of their prediction models indicate periods of  longer, more widespread drought throughout the next century. The Southwestern United States could experience megadroughts lasting more than three centuries.

More frequent drought means communities must rely on water reserves for their water needs, both for personal household use and for industrial and agricultural requirements. Demands on water supplies will increase, water reserves will become more vulnerable to exhaustion, and ongoing drought conditions may make these depleted resources more difficult to restore.


Too much groundwater pumping leads to dangerous depletion of existing water supplies. Many regions pump water from underground aquifers more rapidly than the water stores can naturally replenish themselves.

In the United States, the largest underground water source is the Ogallala Aquifer, which lies underneath much of Nebraska and extends into South Dakota, Wyoming, Colorado, Kansas, Oklahoma, Texas, and New Mexico. It is so large that if it spread across the entire country, it would cover all 50 states with  a foot and a half of water. It supplies 30% of the country's groundwater irrigation.

Excessive use has diminished the Ogallala Aquifer so rapidly that it may be gone in 50 years unless we find an alternate water source to draw from. It would take 6,000 years to fill naturally, so its loss would be catastrophic for the water needs of the middle third of our country.

Why do these leaks occur? Many pipes and water mains in the United States are aging poorly. Cold weather is particularly hard on older water infrastructure, so in the Midwest and Northeast, brutal winters crack the pipes, which then leak slowly all year long. Even in more moderate temperatures, cracks in older pipes and water mains are common. In 2014, in Los Angeles, a  93-year-old water main burst and caused extensive flooding on the University of California, Los Angeles (UCLA) campus.

How to Combat Water Scarcity


Fortunately, there are a few different solutions to combat water scarcity. Though none of these solutions is perfect, each one represents an important step toward providing adequate clean water for our growing needs. 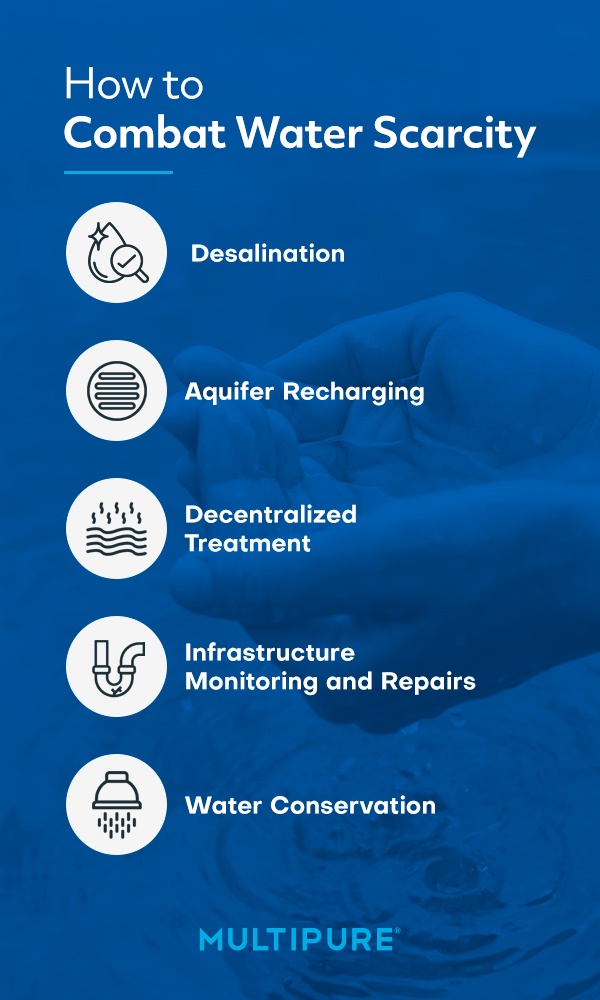 
Desalination removes salt from ocean water and leaves fresh, drinkable water behind. The process involves powerful pumps that force water through a series of membranes.  These semi-permeable membranes prevent the salts and many other minerals from passing through. The resulting stream is clean, potable water. However, there is also wastewater produced that is very high in salt content.

One of the main drawbacks of desalination plants is cost — initial attempts have been prohibitively expensive. Desalination plants can also pollute the air, and the release of the leftover salty brine back into the oceans can  disrupt fish populations. Ongoing advances make desalination a promising option for the future, however.


Aquifer recharging offers a potential solution to the rapid draining of groundwater supplies. Typically, aquifers refill slowly as rain or melted snow seeps through cracks in the Earth and collects in these natural underground repositories. Aquifer recharging speeds the process by injecting extra surface water from dams, lakes, or reservoirs — many times after treating it first — into the aquifers, where it remains available for human use. One of the advantages of this recharging is that water in an aquifer is less susceptible to pollution from surface runoff and losses from evaporation or leaks.


Decentralized treatment solutions involve developing smaller, spread-out water treatment stations that can treat local water. Relying on local treatment solutions instead of one centralized treatment plant means having less water infrastructure to maintain because the treated water will have less distance to travel. Outlying communities can get their clean water from a local source instead of having it pumped for miles through pipes that may leak or burst.


One straightforward solution to the problem of aging, leaky water infrastructure is investing in infrastructure maintenance and repairs. Developing and implementing a schedule of monitoring, reporting, maintenance, and repairs can help address tiny weak spots in pipes before they develop into costly leaks and ruptures. Combining a program like this with new technologies like smart valves and wireless leak-detection devices can also enhance water security.


Exciting new technologies may hold promise for the future, but until we reach those goals, basic water conservation methods help combat water scarcity. We can start by cutting back on lawn watering, taking shorter showers, installing low-flow bathroom fixtures, and eating less meat to reduce our reliance on water-intensive agricultural practices. All these steps help conserve water and guard against water scarcity, especially in areas of sustained population growth.


To keep your household supplied with healthy, great-tasting water, invest in clean water for your family with Multipure's  drinking water systems. 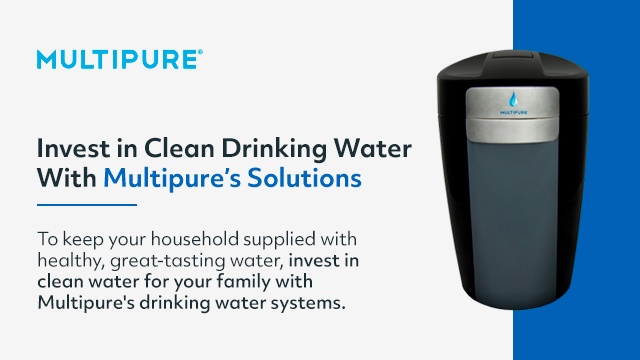 Multipure has been in business for 50 years, and we have the knowledge, industry expertise, and caring customer service to help you find the solution that works well for your drinking water filtration needs. With products for every budget, Multipure uses  Carbon Block filter technology to reduce many waterborne contaminants such as asbestos, chlorine, lead, mercury, perfluorooctanoic acid (PFOA) "forever chemicals," and volatile organic compounds (VOCs), along with many others. You'll receive a lifetime warranty on your drinking water system housing and a 90-day money-back guarantee, so you can rest easy knowing your investment is protected and your family is getting the best quality of water possible.

Contact us today to purchase one of our drinking water systems or to learn more about how they work.