The Multipure Spotlight for September 2020 is “Know Your Contaminants,” which means that this month, our blog posts and social media will focus on the what, why, and how of specific water contaminants and their treatment to make safe drinking water.

Due to media and general public exposure, most people by now know about drinking water contaminants such as lead, microplastics, and the “forever chemicals,” PFOA and PFOS. People generally understand that these contaminants are highly dangerous or – at the very least – highly undesirable in drinking water. For this article, let’s take a step back and discuss the start of the contamination and filtration process: How do contaminants get in your drinking water?

Natural sources of contamination include chemicals, minerals, or other substances that can be found in nature. This can range from relatively harmless dirt or plant matter, to biohazards such as animal waste, to toxic and carcinogenic substances such as arsenic, lead, radon, or even uranium.

Rivers, lakes, and other surface-level freshwater sources can be easily contaminated by dirt or plants in or near the water simply due to their presence. Animals that defecate in or near the water can contaminate the water with bacteria, viruses, or other potential harmful microbial organisms in the waste matter. Groundwater such as underground aquifers, rivers, or wells can be contaminated by minerals and elements in the earth. While some substances in the earth that can enter groundwater, like calcium and magnesium, are generally beneficial in drinking water and tend to improve the taste of the water, other substances – like the aforementioned arsenic, lead, radon, or uranium – pose a great threat to human health.

Man-made sources of contamination include factories and other industrial centers, farms and other agricultural centers, resource mining such as for minerals, oil, and gas, and general human trash and waste.

Industrial water contamination covers a broad range of chemicals and compounds. Lead, mercury, arsenic, and other minerals, heavy metals, and chemicals are used in the production of metal alloys, industrial components, and technological components. 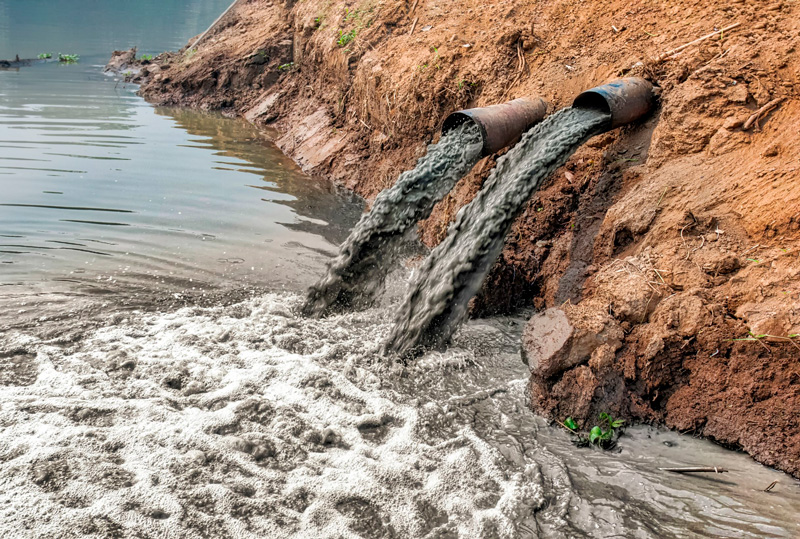 Pharmaceutical production involves the use of many hazardous chemicals, compounds, and acids. Even textiles and housewares use hazardous chemicals like PFAS to increase their ability to repel water, oil, and dirt; examples include stain-resistant carpets, water-resistant coats, and non-stick cooking pans. Industrial runoff from all of these processes can leak or be deposited as waste into both surface water (rivers, streams, and lakes) and groundwater (through spillage seeping deep underground).

Agricultural water contamination consists of the chemicals and byproducts used in farming. Pesticides and herbicides used to protect crops can seep into groundwater through the soil, or enter rivers or lakes through irrigation runoff. Fecal matter from livestock can enter irrigation runoff, potentially contaminating the water with bacteria, viruses, or pharmaceuticals used on the livestock, such as antibiotics.

Resource mining covers a wide range of activities, from mineral, metal, and coal mining, to drilling for oil, to hydraulic fracturing (fracking) for natural gas. In all of these activities, mining and drilling waste, such as rock and dirt, can end up in surface water through disposal into rivers or other waterways; this waste dirt can include toxic compounds and elements such as arsenic, lead, or residue from the mining or drilling materials themselves. Groundwater can be contaminated by the disturbance of the earth in the mining, drilling, or fracking processes. Fracking in particular is a great contributor to groundwater contamination, as a concoction of water and an unknown mix of chemicals are pumped into the ground at high pressure to free up pockets of natural gas; this concoction not only picks up a wide array of underground contaminants, but also contributes its own industrial chemicals and solvents, which then proceed to seep through the earth into underground aquifers and other groundwater deposits. 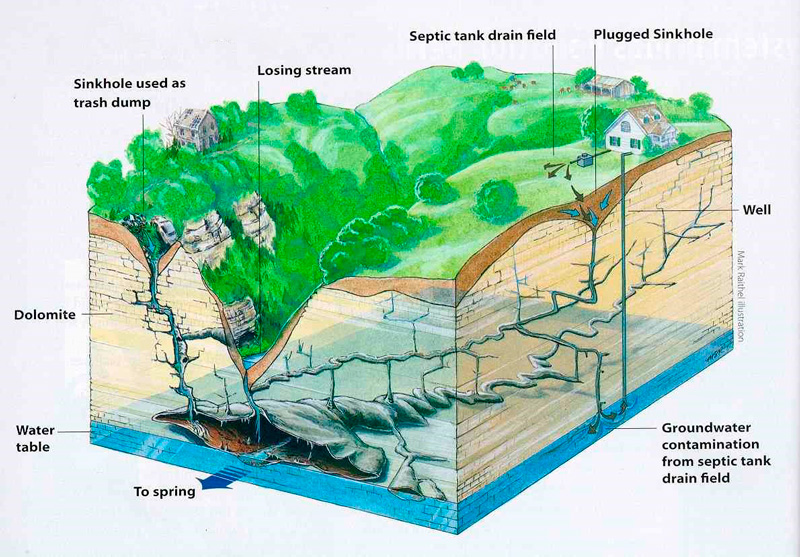 Trash and waste from people’s homes are also man-made contributors to water contamination. Garbage ends up in landfills, where the degradation and decay of the garbage seeps into the ground, enabling harmful contaminants to reach groundwater supplies. Fecal waste and both over-the-counter and prescription drugs flushed down the toilet end up in cesspits or directly to the sewer system. Overflows or leakage from either destination can seep into the ground, where potential contaminants eventually end up in the groundwater.

Contamination isn’t always the result of direct or accidental contact by contaminants with water sources. The municipal water infrastructure can inadvertently cause contamination. Older water pipes can contain lead – either in the pipe material, or in the solder used to connect the pipes. Decay due to natural corrosion, the presence of corrosive chemicals or microbes, or changes in water acidity, can cause that lead to leach into the water. The most infamous recent example of this occurred in Flint, Michigan in 2014, where old pipes corroded and thousands of people were subjected to lead poisoning from their tap water.

Municipal water treatment itself can result in drinking water contamination. In order to render water safe for human consumption, municipal water treatment plants will add disinfectants to the water to kill or otherwise render inert harmful microscopic organisms (microbes, or microbial life) such as bacteria, viruses, or live cysts (microscopic parasites such as giardia or cryptosporidium). The most commonly used disinfectants are chlorine and chloramine (a chlorine-ammonia compound). Unfortunately, chlorine and chloramine can interact with otherwise benign organic matter in the water to form new compounds known as disinfection byproducts (DBPs). DBPs include harmful contaminants such as volatile organic compounds (VOCs), haloacetic acids (HAAs), and trihalomethanes (THMs). All of these contaminants can cause physical harm, including cancer.

Stay safe, stay healthy, and Taste the Difference of Multipure.