Most of us know of ammonia as a helpful household tool, used in cleaning solutions to get our homes sparkling clean. But what about ammonia in our water supply? We wouldn't fill a glass of ammonia and drink it, so we probably don't want it coming out of our kitchen faucets either.

Is ammonia present in our drinking water? — and if so, how does ammonia affect water quality? In this guide, we'll explain what ammonia is, how it can affect your water, how to detect it, and more.

Ammonia (NH3 or NH4+) is a chemical compound made of hydrogen and nitrogen. It is one of several forms of nitrogen that are present in many aquatic environments. It is a colorless, strong-smelling gas, and it is highly soluble in water – meaning it dissolves easily.

Ammonia is found in low levels in nature and in the human body, and it is common in many households as a cleaning solution. Many glass, floor, and counter cleaners have an ammonia base. About 90% of the ammonia produced industrially goes into fertilizer. Ammonia is also a component of human and animal waste and is responsible for the strong, sharp odor associated with diapers, feedlots, and other places where urine and fecal matter are found.

Estimates suggest the average adult consumes 18 milligrams of ammonia a day with no ill effects. Since ammonia is a natural product of the breakdown of protein, ammonia is also produced daily in our bodies as we digest proteins. We then excrete the ammonia in our urine.

Ammonia can also be found in most water sources as a byproduct of organic decomposition processes, especially the decomposition of proteins, which contain nitrogen. For example, the decomposition of a deer or squirrel carcass in the forest produces some ammonia — and so does the decay of a fallen tree. Most ammonia in the soil accrues as bacteria break down organic matter. Forest fires, human and animal waste, nitrogen fixation processes, and gas exchanging with the atmosphere can also result in the formation of ammonia.

Ammonia exists in either one of two forms. It can exist in a pure, un-ionized, uncharged form (NH3), or it can exist as a positively charged ammonium hydroxide ion (NH4+) when it dissolves in water. The form ammonia takes in water is highly dependent on the temperature and pH of the water. Warmer water will contain more of the un-ionized form and less of the ionized form than colder water, as will water with a higher, less acidic pH.

The un-ionized form of ammonia is the one that can be toxic to some forms of life. The ammonium ion does not have the same toxic properties.

The Environmental Impact of Ammonia in Water

High levels of ammonia in water can have a significant environmental impact.

So, what causes high ammonia levels in water? Ammonia most often comes from agricultural fertilizers and industrial process wastes that contain ammonia that gets into surface water in runoff.

Toxicity of Ammonia and Ammonium

In water, some ammonia breaks down to form the ammonium ion plus hydroxide ions. Ammonia is toxic to aquatic life, but ammonium ions are not. Generally, in water, an equilibrium exists between these two types of ammonia, and molecules change back and forth between the two states depending on pH and water temperatures.

At the acidic pH of 6, for instance, the ratio of ammonia to ammonium is about 1 to 3,000. At the basic pH of 8, that ratio declines sharply to 1 to 30. Warm water also tends to contain more toxic ammonia than cooler water.

Ammonia in water is non-toxic to humans, but it is toxic to aquatic life. Unlike other forms of nitrogen, which can indirectly harm aquatic ecosystems by increasing nutrient levels and promoting algae growth in the process known as eutrophication, ammonia has direct toxic effects on aquatic ecosystems.

Aquatic plants can absorb ammonia and incorporate it into some of the molecules of their structures, such as proteins and amino acids. Once aquatic organisms have absorbed it, it is challenging for them to excrete ammonia from their systems. It tends to build up in their tissues and blood until it kills them. For example, freshwater unionid mussels are highly sensitive to ammonia in water, as are freshwater gill-breathing snail species, along with many other invertebrates, fish, and plants.

Additionally, high levels of ammonia in lakes and streams can promote the growth of algae, which in turn can choke out the growth of other aquatic plants. Bacteria can also convert ammonia in water to nitrate in a process known as nitrification. Nitrification is a beneficial process if it takes place in the soil — plants can use the produced nitrates as food. However, nitrification tends to lower the dissolved oxygen levels in water, making it harder for fish and other aquatic life to breathe.

How Does Ammonia Affect Water Quality?

Ammonia in drinking water can sometimes create an unpleasant taste and smell, which is caused by the formation of chloramines, which the addition of ammonia helps promote. Chloramines form when both chlorine and ammonia are added to drinking water to disinfect it. However, ammonia is not thought to be toxic to human health at the levels found in drinking water.

Water that has become contaminated with fertilizer, chemical runoff, or animal waste may also contain increased levels of ammonia. Because of its lower toxicity to humans, the U.S. Environmental Protection Agency (EPA) has not set a standard upper limit for ammonia in public water sources. Local environmental limits for ammonia in drinking water throughout the United States range from 0.25 to 32.5 milligrams per liter.

The WHO, like the EPA, considers the amount of ammonia regularly found in drinking water to be of minimal concern for human health. For that reason, the WHO has not issued specific health-based guidelines for the levels of ammonia in drinking water.


However, the EPA has established recommended water quality criteria for total ammonia nitrogen (TAN) in water. These criteria are not law — they are guidelines that have the force of law only if states adopt them into their standard water quality criteria. Nevertheless, they remain helpful guidelines for determining safe ammonia levels. The EPA recommendations for ammonia include:

High levels of ammonia in water are often indications of fecal contamination. In this case, the water may be contaminated with fertilizer or with fecal matter from nearby livestock. This scenario can cause the water to have an extremely unpleasant taste and smell. It can also increase the difficulty of disinfecting the water and thus increase the likelihood of waterborne illnesses.

Ammonia is also often found in water along with chlorine, which can impart an unpleasant taste and odor, dry out the skin, and potentially react with other contaminants to form carcinogenic substances.

Is There Ammonia in Drinking Water?

Municipal water systems have been using ammonia as a drinking water treatment for over 70 years. It boosts and prolongs the beneficial effects of chlorine, which is widely added to municipal water supplies as a disinfectant.

When chlorine and ammonia are both added to drinking water, they react with each other to form chloramine. Most often, some part of the ammonia does not combine with the chlorine and remains in the water as free ammonia.

That free ammonia exists in different proportions of ammonia and ammonium, depending on factors like temperature and pH of the water. At a standard water temperature of 55 to 75 degrees Fahrenheit and a pH of between 7 and 7.8, 96% of the ammonia in drinking water is likely to be the ionized form of ammonium (NH4+). The other four percent is un-ionized ammonia.


Below are a few signs that may suggest high levels of ammonia in drinking water: 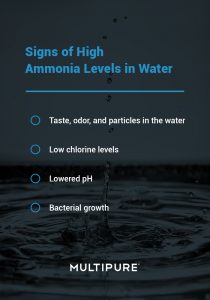 
However, the usual levels of ammonia in drinking water are not high enough to cause these symptoms.

Can You Filter Ammonia From Drinking Water?

How do you get ammonia out of water if you suspect high levels? Ammonia is water-soluble, making it challenging to completely filter out, even when using high-tech filtration systems. Boiling your water can reduce the amounts of free ammonia, but it will not be effective against the ionized or dissolved forms.

Some reverse osmosis, ion exchange, or distillation systems may be effective for some ammonia reduction. But these systems are prohibitively expensive for many households to purchase and operate. The relatively low health risks associated with ammonia in drinking water make purchasing these expensive systems impractical for many homes — just as you wouldn't buy thousands of dollars of bug spray to kill a few ladybugs in your garden.

Fortunately, because the low levels of ammonia in drinking water are non-toxic to humans, filtering for ammonia is not necessary to make your water safe to drink.

And some of the harmful effects associated with ammonia levels — such as the presence of coliform bacteria caused by fertilizer or animal waste — are automatically filtered at municipal water facilities.

The normal levels of ammonia in drinking water treated in municipal facilities are not considered hazardous to your health. However, there are a few situations where you might want to reduce ammonia to prevent any adverse health effects. The following situations might make you want to know how to filter ammonia from water:

Distillation is effective for ammonia reduction, although the cost of purchasing, installing, and operating a distillation system makes it unfeasible for most households. Since water with low ammonia isn't toxic, distillation may be more trouble than it's worth.

If you want to reduce the effects of ammonia, you can invest in a water purifier, such as Multipure's Aqualuxe, to filter harmful bacteria and other contaminants like chloramine from your household's water. Aqualuxe reduces chloramine levels in water by over 97.5% and improves your drinking water's taste, odor, and overall quality. Aqualuxe also treats DBPs to protect you from potentially toxic byproducts of chloramine.

Many other contaminants exist alongside ammonia in public water systems — chlorine, PFOs and PFOAs (forever chemicals), asbestos, lead, mercury, viruses, and bacteria, just to name a few. When you need a way to filter these contaminants from your home's water, trust Multipure.

For over 50 years, our drinking water systems have helped reduce contaminants and leave your drinking water fresh and clean. Our Aqualuxe system was one of the first to be certified under NSF Standard 53 to reduce harmful PFOs and PFOAs from your water. And our bath and garden help reduce the amount of chlorine in your bath, shower, and on-the-go water, as well as providing a whole-house filtration option.