Have you gone to your favorite lake or pond in the summer only to find its clear, refreshing water overgrown with an unsightly, smelly green-blue scum? Harmful algal blooms (HABs), which are made from cyanobacteria, are becoming more and more common across the country.

According to the Natural Resources Defense Council (NRDC), the incidence of harmful freshwater cyanobacterial blooms has increased significantly over the past 40 years and poses an environmental threat in  every one of the 50 U.S. states.

In this guide, we'll discuss what cyanotoxins are, the potential risks, and how you can avoid being exposed to them.


Cyanotoxins are a group of  toxins produced by cyanobacteria, which are more commonly known as blue-green algae. These bacteria live in fresh, brackish, and marine water. Like plants, they perform photosynthesis, turning sunlight into carbohydrates for food. They often accumulate in lakes, ponds, streams, and other surface waters where currents do not disturb them.

Cyanobacteria multiply rapidly in favorable environmental conditions. When they proliferate in this way, they form what are called blooms: large green or blue-green bacterial mats on the surface of the water. Some species of cyanobacteria have anatomical pockets that fill with gas and let them float to the surface in the right conditions. This floating ability allows them to aggregate in blooms.

Some cyanobacteria live in sediment at the bottoms of freshwater bodies but rise to the surface when storms disturb them. Other species can remain suspended at lower depths, giving the water a faint general discoloration.

Why Do Harmful Algal Blooms Form?


What are the right conditions for blooms to form? According to the Environmental Protection Agency (EPA) and the NRDC, favorable growing conditions are:


As the cyanobacteria bloom, die off and decay, they consume much of the available oxygen in the water. In doing so, they choke out larger species like fish and plants. Harmful algal blooms often contribute to the death of much of the aquatic life in the rivers, ponds, or streams they occupy.

Cyanobacteria often produce toxins as they metabolize their food. Many species of cyanobacteria release their toxins into the water only when they die, though some species can release these toxins at all times. In either case, the toxins contaminate the water and also adhere to soil and organic matter, where they are difficult to remove.


How Can You Be Exposed to Cyanotoxins?


You can be exposed to cyanotoxins in water in several ways, including: 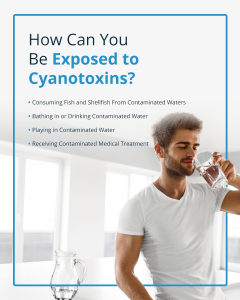 2. Bathing in or Drinking Contaminated Water


If the water flowing into your home comes from a contaminated source, some cyanotoxins may be present. Up-to-date wastewater treatment systems can usually remove cyanotoxins, but insufficient treatment puts human health at risk.

Current estimates suggest that  30 to 48 million Americans get their water from sources subject to periodic contamination with cyanobacterial toxins. In 2014, 500,000 people in Toledo, Ohio, were unable to drink their tap water for three days because of harmful cyanobacterial blooms in Lake Erie that sickened more than a hundred residents.

If your home's water source becomes contaminated, you may ingest cyanotoxins in the water you drink or absorb them through your skin in the shower or bathtub.


Swimming, tubing, waterskiing, jet skiing — engaging in any of these activities in contaminated water exposes you to cyanotoxins. You can absorb the water through your skin, or you might accidentally swallow some. Cyanobacteria can also  accumulate in bathing suits and diving suits, where they break open and expose the skin to even more toxins.

Though most people are likely to steer clear of water overgrown with harmful algal blooms, cyanotoxins may be present in the water even if blooms are not apparent to the eye.


Though this scenario is less common, cyanotoxin exposure can occur when clinics perform medical procedures using contaminated water. In 1996, in Caruaru, Brazil, more than a hundred patients at a kidney dialysis clinic began to experience blurred vision, eye discomfort, headaches, nausea, and vomiting after receiving  IV fluids containing cyanotoxin-contaminated water. One hundred of those patients went on to develop liver failure, and the majority of the cases were fatal.

The Potential Risks of Cyanotoxins


According to the EPA, exposure to cyanotoxins causes several adverse health effects, including:


It's not just humans who are susceptible to health risks from cyanotoxins. Pets can become sick too.  Cyanotoxin exposure in pets causes many of the same symptoms seen in humans — including difficulty breathing, excessive salivation, vomiting, diarrhea, fatigue, and seizures.

Because they are more likely to swim in and drink contaminated water, dogs are particularly vulnerable to illnesses caused by cyanotoxins. A recent report found  63 cases of canine toxicity and 20 canine fatalities across 13 states, all due to cyanotoxin exposure.

How to Tell If Your Drinking Water Contains Cyanotoxins


Though algal blooms sometimes produce a foul smell, the EPA cautions that cyanotoxins may be present in water without causing unpleasant odors or tastes. Generally, professionals must collect water samples and test them to determine whether cyanotoxins are present.  Biological tests and chromatographic tests are common methods of evaluation.

Biological tests like enzyme-linked immunoabsorbent assays (ELISA) can help assess the presence of cyanobacteria. ELISA kits work by using antigens, antibodies, and enzymes to provide an indicator of a specific substance, usually through a color change on a specific surface. They are commonly used in testing because they do not require prohibitive amounts of equipment or training. They often cannot identify specific strains of cyanotoxins, however.


What You Can Do to Protect Your Water

Water filtration and purification systems are excellent options for protecting your household from cyanotoxins. Different types of systems offer varying levels of effectiveness. How well a filtration system works against cyanotoxins also depends on the state of the toxins present.

Intact cells containing cyanotoxins are easier to filter out. Cyanotoxins from cells that have decayed and dissolved their toxins into the water are more difficult. Some common methods for removing or screening for cyanotoxins in your water include:


According to the EPA, the effectiveness of activated carbon depends on the type of carbon and the size of its pores:


UV light systems also work well to reduce cyanotoxin concentrations. However, effective reduction requires such high doses of UV radiation that the practical applications of this method are limited.


Water purification systems are the best option for removing cyanotoxins from household water. They are specifically engineered to remove microscopic particles and are effective against a host of chemical contaminants as well.

When you're thinking about how to purify water in your home, the  Multipure Aqualuxe is an excellent solution. It combines traditional carbon filtration technology with Multipure's patented PureBlock microbiological filtration technology. It is highly effective against viruses, bacteria and other microbiological contaminants and can provide your home with clean, pure, safe water for every household use.

The Aqualuxe has proven to  perform effectively against microcystins. However, if a cyanobacterial bloom occurs in your water supply, other types of cyanotoxins may infiltrate as well. If you know of a cyanobacterial risk in your area, contact authorities for guidance on whether your purified tap water is safe to drink.

Contact Multipure for Cyanotoxin Filtration and All Your Water Filtration Needs

The importance of water purification and filtration in the home cannot be overstated. To help keep your family safe from waterborne cyanotoxins and other biological and chemical contaminants, make Multipure your trusted source for home drinking water systems.

Our Aqualuxe, Aquaperform, and Aquaversa systems install easily under your sink or on your countertop to give your family fresh, clear water and protection against cyanotoxin contamination. We also offer a  whole-house filtration system and several shower and bath products for filtering chlorine and chloramine. Our unparalleled filter performance helps keep your water clean and healthy.