Many people are familiar with common waterborne contaminants that could make them sick. Microorganisms like Giardia and E. coli can cause gastrointestinal illnesses, and heavy metals like lead and mercury are notorious for their detrimental effects on human health.

But what about algal toxins like microcystin? This common water contaminant can have profound effects on human health and well-being. But most people don't know what microcystin is or what harms it can cause.

In this guide, we'll explain what causes microcystin, discuss microcystin testing and treatment, and offer some options for in-home protection.

Cyanobacteria are commonly found in surface waters when conditions are favorable for their growth. They are stable in sunlight and thrive in sunny conditions.

One common type of cyanobacteria that releases microcystin is known as Microcystis. Microcystis blooms are typically green, thick, and sometimes granular, with a consistency resembling that of paint. They tend to accumulate along the shorelines of lakes and ponds.

Scientists have identified several different kinds of microcystins. One of the most frequently studied is microcystin-LR. Other types include microcystins RR, YR, and LA — the different letters indicate the structure of the toxin. These differences are significant because suggested drinking water limits exist for microcystin-LR but not for other types.


In 2014, the city of Toledo, Ohio, issued a warning for residents to avoid drinking tap water as blue-green algae bloomed and spread in Lake Erie. The harmful  microcystin released from the blue-green algae, which contaminated many households' drinking water.

The U.S. Environmental protection agency (EPA) does not currently regulate microcystin levels in drinking water. However, the World Health Organization (WHO) has established a provisional guideline of  one microgram per Liter (1 part per million or ppm) for microcystin-LR. Plus, individual states may have specific guidelines in place that establish safe microcystin levels for local public water supplies.

Microcystin-Producing Cyanobacteria in a Balanced Ecosystem


Cyanobacteria that produce microcystin can have toxic effects on health and the environment — but they have beneficial effects as well. They are crucial photosynthesizers — like plants, they remove harmful carbon dioxide from the atmosphere and return oxygen that we can breathe. They are also essential as primary producers — they convert light energy into other forms of energy that they and other organisms can use.

Because cyanobacteria in controlled numbers are an integral part of a balanced ecosystem, it's important to know how to test for and avoid the toxins they can sometimes produce.

Conditions favorable to cyanobacterial growth include warm temperatures and an abundance of nutrients — especially nitrogen and phosphorus — in the water. Temperatures ranging from  five to 30 degrees Celsius (41F - 86F) can foster cyanobacterial growth, but temperatures ranging from 20 to 25 degrees Celsius (68F - 77F) are ideal, as are higher pH levels — generally between 6 and 9. Most blooms occur in late summer and fall.

Because cyanobacteria thrive on nutrient excesses, agricultural and chemical runoff is one common cause of algal growth and microcystin release. Agricultural and chemical runoff often contains high levels of nitrogen and phosphorus that can feed cyanobacterial growth and contribute to the production of microcystin. The wastewater released into the environment from treatment facilities can also contain high levels of these nutrients and promote cyanobacterial growth.

Once the bacteria die, cell death and rupture — known as lysis — causes the cell membranes to spill the microcystin into the surrounding aquatic environment. Some types of toxins have a high affinity for clay and organic matter in the water. They may bind to these materials and become exceptionally difficult to remove.

Algal blooms may also form along shorelines and then dry up with the changing seasons. When the algal scums along the shoreline dry up, they can harbor microcystin for weeks – or sometimes months. The toxins can then dissolve into the water, even when the bloom has collapsed and the bacterial cells are long dead.

Five Signs of Microcystin in Water

It is impossible to tell merely by looking at a blue-green algal bloom whether that bloom is producing cyanotoxins, including microcystin. However, a few telltale signs can point to the presence of microcystin in water, including: 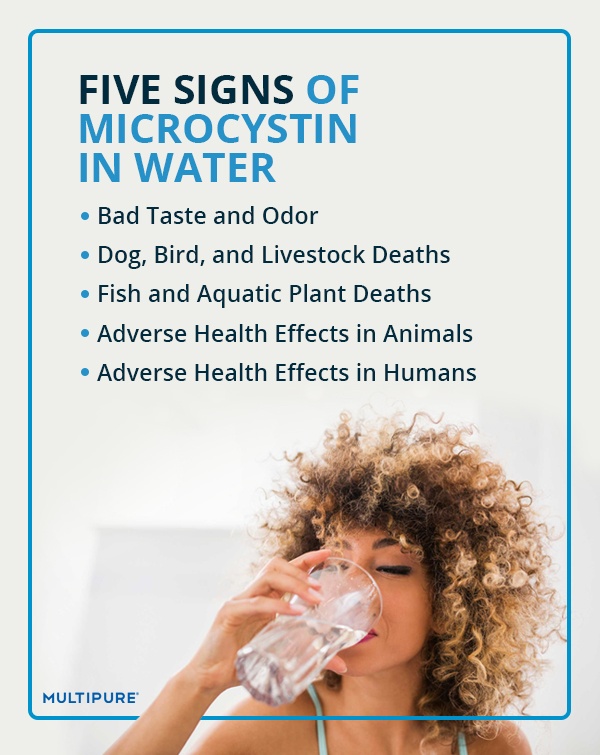 
In many cases, cyanobacterial blooms that release microcystin impart an unpleasant, musty taste and smell to the water — this is because cyanobacteria often produce what are known as taste-and-odor compounds. These are chemical compounds that cyanobacteria naturally produce — two examples are geosmin and 2-methyl isoborneol (MIB). The compounds give the water a characteristic taste and odor and frequently indicate the presence of cyanotoxins, including microcystin.

Not all odd smells and tastes in water are caused by microcystin, but it is one plausible culprit. However, it's also important to note that, in some cases, microcystin does not affect water's taste or smell. So even water that seems clean enough could potentially be contaminated.


Around the world, communities have  reported the deaths of animals like dogs, birds, and livestock where microcystin has entered the surface water because of cyanobacterial blooms. If you have a water source in your community where higher-than-average numbers of animal deaths have occurred, microcystin could be the culprit.


Algal blooms may also lead to high numbers of fish and aquatic plant deaths in lakes and ponds. Concentrated algal growth tends to consume much of the available oxygen in the aquatic ecosystem. When this happens, inadequate oxygen remains to sustain the fish and plant populations. A lake or pond where algae are growing but plants and fish appear to be dying may contain cyanobacteria, including cyanobacteria that produce microcystin.


Animals like dogs are particularly susceptible to the harmful effects of microcystin because, unlike humans, dogs and other creatures are much more likely to go swimming in or take a big gulp of water from a lake or pond infested with an algal bloom. Microcystin ingestion in animals can cause symptoms like breathing difficulties, diarrhea, fatigue, profuse salivation, seizures, and vomiting.


Adverse health effects that do not have a clear cause, such as headaches, fatigue, or nausea, could potentially be a result of microcystin contamination in the drinking water supply. Microcystin is of particular concern if the drinking water supply is surface water where conditions are right for algal blooms to form. Municipal water treatment plants can often add chemicals to the water to cause the microcystin to clump together and precipitate out of the water column. But shallow wells are at higher risk of microcystin contamination because they do not receive this treatment.

How Microcystin Impacts Your Health


Microcystin affects human health in several different ways. It primarily impairs the function of the liver, but the symptoms it causes can affect the whole body. Microcystin can cause these  acute symptoms in humans:

Long-term ingestion of microcystin has also been implicated in  cancerous tumors of the liver and intestines.

Microcystin disproportionately affects the liver, but patients who undergo renal dialysis for kidney failure are also particularly susceptible to the health effects of microcystin. This susceptibility results from the large volume of water that flows through the body during dialysis.

In 1996, at a renal dialysis clinic in Brazil, 116 patients reported symptoms such as headaches, blurred vision, nausea, and vomiting. Health authorities later traced these symptoms back to microcystin and other cyanobacterial contaminants in the water used for dialysis.

Humans may become ill from microcystin poisoning in several different ways, such as:


How do you test for cyanotoxins, including microcystin? One of the best ways to know whether you have microcystin in your drinking water is to partner with local water professionals. Water professionals can perform highly accurate tests to determine the cyanotoxin levels in your home's water.

One of those tests is known as the enzyme-linked immunosorbent assay (ELISA) test. ELISA tests are valuable because they offer rapid turnaround times, and they provide precise, quantitative results about contaminant levels.

For the  treatment of extracellular microcystin, a few different methods are useful:


When you're looking for a home water system that will reliably  reduce microcystin levels, Multipure has a few excellent options:

Partner With Multipure for All Your Household Water Treatment Needs

Whether you need a filtration system to help decrease microcystin levels, reduce other  common contaminant levels, or make your drinking water taste and smell crisp and clean, look to Multipure for dependable solutions. We offer reliable, high-performing drinking water essentials to keep your home's water safe and great-tasting. Plus, our line of home essentials includes shower and bath products to leave your skin and hair feeling restored and healthy, along with a whole-house filtration system for complete coverage.