Over 50% of Americans depend on groundwater for drinking water. It also serves as an essential source for irrigation water. However, groundwater is also extremely susceptible to pollution. Materials and substances from the surface can move through the soil and seep into water resources. From pesticides and fertilizers to septic tank and underground storage waste, any number of contaminants can leach under the surface to cause groundwater contamination.

If you're one of the many people who rely on groundwater as a primary water resource, it's essential to know about the potential pollutants in your water so that you can protect yourself from them.


Water is particularly vulnerable to pollution because  it is known as a universal solvent — this means that it can dissolve a wide variety of substances. While this trait is useful in cooking, it's not ideal in environments with toxic substances. Toxic materials from any number of sources can leak into groundwater and dissolve into it, causing widespread water pollution. Some of the primary toxic materials and sources of pollution are listed and explained below: 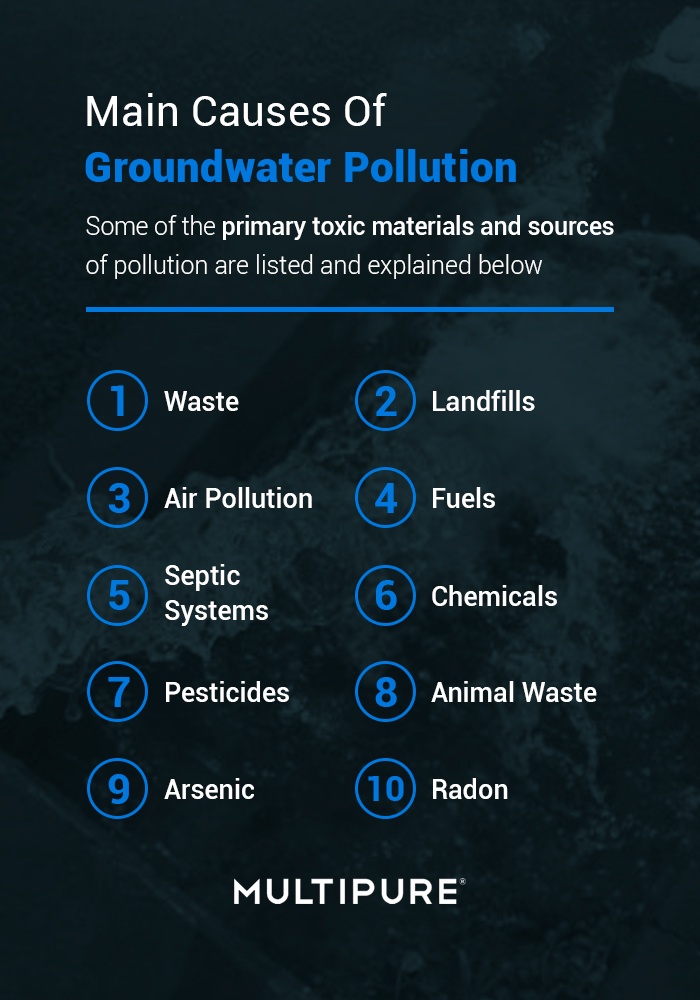 
Any type of used water is called wastewater. It can come from our homes or businesses and includes water from sinks, showers, toilets, and industrial activities. It also includes stormwater runoff, which is what happens when rainfall carries road salts and automotive chemicals from the road to the waterways.

The United States does what it can with its wastewater treatment facilities, which process about  34 billion gallons of wastewater per day. These facilities remove pollutants like pathogens, phosphorus, and nitrogen before discharging water back into waterways. However, this treatment process still only handles under 20 percent of the total wastewater produced — over 80 percent flows back into the surrounding environment without being treated or reused. Even more concerning is the fact that overwhelmed and aging sewage treatment systems are becoming less effective over time, and are currently releasing over 850 billion gallons of untreated wastewater each year.


According to the U.S. Environmental Protection Agency, in 2015 alone, the United States produced  262.4 million tons of municipal solid waste, which equals approximately 4.48 pounds per person per day. Where did all of it go? More than half of it was deposited in landfills.

Landfills are normally designed to protect against contaminant leakage. Complex systems of liners and protective layers are put down before dumping to prevent contaminants from seeping into the ground and contaminating natural resources. However, these liners aren't perfect. In rare cases, toxic leachate from the landfill can seep through cracks or holes in the landfill lining and reach groundwater. More often, however, contamination occurs through more indirect means.

The most common landfill-associated contamination occurs through transportation, runoff and animal activity. Waste-carrying trucks leak solid and hazardous waste as they transport materials, or get into accidents that result in leaks. The rain that flows through the landfill is another source of pollution, as it is rarely treated before being dumped back into the surrounding environment. Finally, bird populations often feed on new trash added to landfills, then fly to secondary locations, carrying with them any toxins they picked up while they were at the landfill.


Since groundwater is part of the water cycle, contaminants affecting other parts of the cycle can have a significant effect on groundwater quality. As a primary example, air pollution can be picked up by the water in the atmosphere to produce acid rain, which is a grave problem for groundwater supplies.

While many environments have natural buffers against acid rain in the form of rich soil, an increasing number of environments, particularly urban and suburban areas, don't have the buffering capacity to handle larger amounts of acid rain. As a result, when the acid rain hits the ground, it can seep in and affect groundwater.

Groundwater isn't the only resource in danger from acid rain, however. Many plants and animals are sensitive to acids and may experience increased mortality in the presence of acid rain, negatively affecting the ecosystem in general and causing long-lasting effects. Acid rain is even dangerous to humans, as it can cause skin and lung irritation, and prolonged exposure can cause heart problems.


Fuels are another source of contamination that can get into groundwater sources through several means.

One common way that fuel negatively affects groundwater sources is through air contamination. When cars, ships, airplanes, coal-fired power plants and industrial operations burn fossil fuels, they  release nitrogen oxides into the air, which contribute to the production of acid rain. The acid rain then deposits these nitrogen oxides back onto land, washing it into nearby water bodies and into groundwater sources.

Another common cause of fuel pollution is stormwater runoff. Cars and planes may leak fuel as they operate, or fuel may spill during the fueling process. Storms may then wash any gas or other fluids left on the road into wastewater systems. Because the majority of wastewater is untreated, this fuel pollution will likely leak into the environment.


While municipal sewage systems serve  80 percent of American homes and businesses, about 20 percent are responsible for their own waste management. Septic systems are onsite wastewater disposal systems commonly used by homes and offices. While properly built septic systems are designed to drain human waste at a harmless rate, poor design, location, maintenance, or construction can cause these systems to leak pathogens, household chemicals, and other contaminants into the surrounding area. This issue can be particularly problematic for people who get their drinking water from nearby private wells.


Chemical contaminants come from a variety of residential, agricultural and industrial sources.  Aluminum, Chloramine, Lead, Mercury, Radium, and Uranium are just a few examples of common waterborne chemical contaminants. Runoff from industrial and agricultural areas is one of the most common ways that these chemicals get into groundwater. However, current estimates state that there are about 20,000 known abandoned and uncontrolled hazardous waste sites in the United States, and that number increases with each passing year. These waste sites are dangerous, as any leaks in containment vessels can cause hazardous materials to leak into the soil and groundwater.


Pesticides are chemicals  applied to farmlands, gardens, and lawns that are meant to control pest populations. However, these toxic chemicals can make their way into groundwater systems through runoff. While not all pesticides pose a health hazard to humans, some of them increase the risk of cancer and reproductive problems and can injure the eyes, liver and kidneys.


Animal waste is another nonpoint source of water pollution that comes from the agricultural industry. Often produced by dairy and poultry operations, animal waste is an economical and commonly used fertilizer. However, animal waste can leak into groundwater supplies and cause various health problems.

Animal waste contains various pathogens and chemicals that are hazardous to human health. Cow waste, for example, can contain  disease-causing bacteria like fecal coliform and E. Coli. Animal waste is also a common source of nitrate nitrogen, ammonia nitrogen, phosphate, copper, zinc, and sulfate, which are all problematic for water sources.


Arsenic is a heavy metal that is commonly found in the environment in rocks, soil and various plants. These natural sources, however, are rarely problematic. High levels of arsenic in water usually results from human activity. For example, numerous industries commonly use arsenic-based compounds and pesticides, and mining operations and combusting coal can release arsenic into the environment.

The Environmental Protection Agency sets a limit of  10 parts per billion for arsenic levels in public water systems, which is the same limit set by the FDA for bottled water. If levels breach that limit, the risks to human health increase. Chronic low-dose exposure to arsenic has been shown to cause respiratory problems and cardiovascular disease and may be linked to diabetes and various cancers. Fetal development is also negatively affected by arsenic exposure.


Radon is an odorless, colorless, and tasteless gas that comes from the natural radioactive breakdown of uranium. Radon is often found in indoor air, released into the home as uranium breaks down beneath it. However, radon can also seep into the ground and accumulate in groundwater. When this water is brought to the surface and used, that radon gas is released into the air. While only  one to two percent of radon gets into the atmosphere through this method, it is still dangerous to human health.

Breathing radon traps these radioactive particles in the lungs, potentially causing lung cancer. In fact, radon in indoor air is the second leading cause of lung cancer in the United States,  causing about 20,000 deaths a year. Drinking water contaminated with radon can also negatively affect health. The EPA estimates that radon in drinking water causes 168 cancer deaths per year. Lung cancer caused by breathing radon released from drinking water causes 89 percent of these deaths, while stomach cancer caused by consuming contaminated water causes 11 percent of them.

A recent study by the University of Illinois found that karst aquifers – groundwater ecosystems made up of creviced carbonate rock, and that make up one-quarter of global drinking water sources – are now contaminated with microplastic particles. 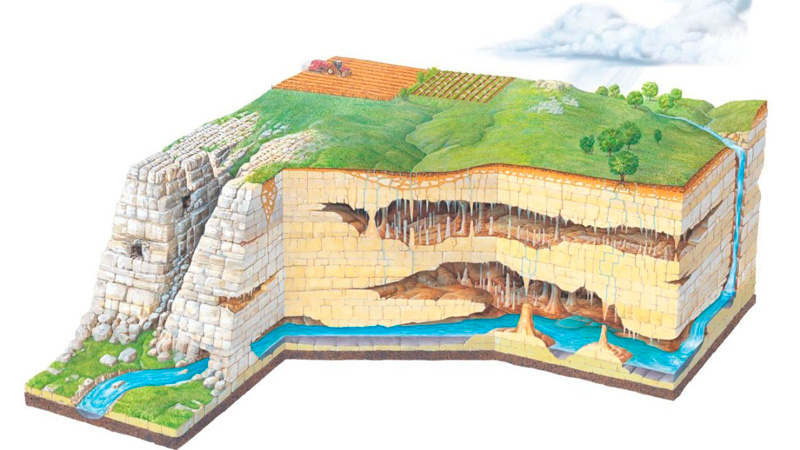 Examining 17 groundwater samples from areas near the St. Louis metropolitan area and rural northwestern Illinois, researchers discovered that 16 of the 17 samples contained microplastic particles, and at a concentration comparable to those found in rivers and streams in the Chicago area. 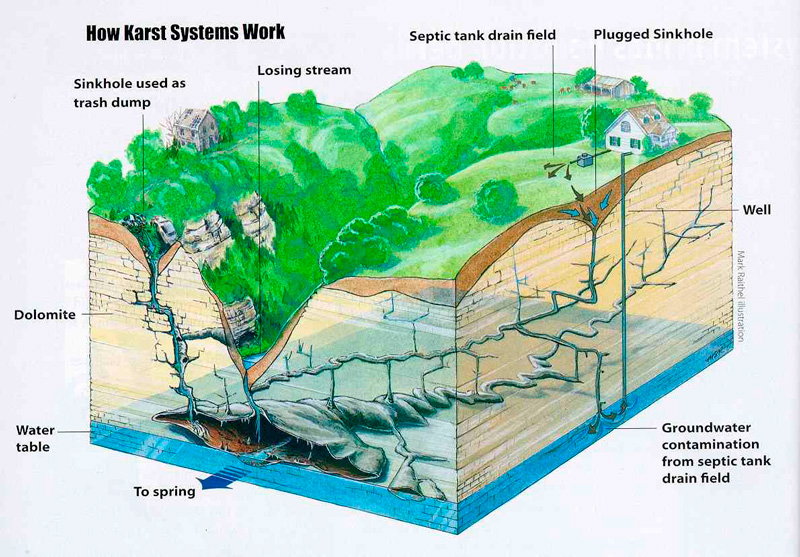 Analysis suggests that these karst aquifers are contaminated from groundwater seepage that includes sewage and runoff from roads, landfills, and agricultural areas, and even include traces of pharmaceuticals and household contaminants.

Unfortunately, the limited research available on the effects of microplastic contamination precludes them from determining how their spread to underground aquifers will affect the health of the general populace. What this study does offer is more support for the continued study and awareness of plastic contamination in water, as it is becoming an almost distressing certainty that a great many people have inadvertently ingested microplastic particles through contaminated water.


Water pollution is hazardous to human health. For those it doesn't kill, contaminated water can cause disease. In total, water pollution caused  1.8 million deaths in 2015 and sickened about 1 billion. Even swimming in polluted water can pose a risk to human health, with 3.5 million Americans contracting skin rashes, pinkeye, respiratory infections, and hepatitis from sewage-laden coastal waters each year. Of those affected by water pollution, low-income communities are disproportionately affected, mostly because of their proximity to pollution sources and underfunded infrastructure.


How You Can Protect Yourself


With so many potential sources of pollution and numerous side effects, it's essential to do what you can to protect yourself and others. Here are just a few ways that you can prevent and reduce the impact of groundwater contamination:

If you're looking for a way to filter and purify your water and improve its quality, Multipure is here to help. We offer a range of water filtration products that can help people solve their water quality issues.

Countless sources of pollution can cause your groundwater to become unsafe for consumption. From pesticides and fertilizers to road salt and motor oil, contaminants in your water can cause it to become foul-tasting, odorous, or even carcinogenic. While there are many ways that you can help your community at large prevent and combat pollution, it's also important to keep yourself and your family safe. That's where Multipure's water filtration and water purification products can help.

Since 1970, Multipure has been developing products designed to provide cleaner, healthier drinking water. We believe that everyone should have affordable access to high-quality drinking water. That's why we offer economical solutions for residential and commercial applications alike.

To learn more about our water filtration and water purification solutions, and our industry-leading carbon block technology that empowers our products, contact Multipure today.