This guide covers the most common disinfection byproducts (DBP) and how they get into the water. Here, we’ll inform you of the potential risks posed by various disinfection byproducts — and more importantly, the simple actions you can take to avoid the potential consequences of consuming these byproducts. With this guide, you can learn how to avoid exposure to these carcinogens, and how to make a difference in improving the water in your home for you and your family.

Why Are Disinfectants Used in Water Today?


Because drinking water may contain a variety of viruses, bacteria, and other microorganisms, those who supply public water often add disinfectants to their water to kill them. Disinfection byproducts in drinking water are the sometimes carcinogenic chemicals formed when disinfectants, such as chlorine, interact and react naturally with the organic substances in the water’s source.

The primary reason disinfectants, like chlorine, are used in water today is to prevent gastric symptoms, like nausea, vomiting and diarrhea from occurring when there are contaminants in the drinking water.

The severity of the chemical byproducts in your drinking water vary a great deal depending on the following factors:

According to the Centers for Disease Control and Prevention (CDC), chlorine is the chemical most commonly used to disinfect water today. It’s history as a water disinfectant dates back to 1850 when it was used to disinfect the water supply in London during the cholera epidemic. It has been widely used for water disinfection and purification since the early 1900s. However, recent questions related to the effects of chlorine in water have many questioning how advisable it is to continue using chlorine for this purpose.

How Does Exposure to Disinfection Byproducts Occur?


You can be exposed to disinfection byproducts in water through these three ways.

When it comes to DBPs in drinking water, experts have identified more than 600 disinfection byproducts, but only 11 are regulated to date, according to the Water Research Foundation. Some believe many more have not yet been identified.

The most commonly found disinfection byproducts are:

Below, we go over them one-by-one, so you can learn the basics of what they are, the types in each category and how they get into the water.

The World Health Organization (WHO), also has developed guideline values for a variety of contaminants in drinking water. Unfortunately, there is a distinction between standards and guidelines, and while the values set forth by the WHO are recommendations to consider, they are not regulatory mandates.


One of the newer disinfection byproducts to be discovered in drinking water, haloacetic acids, form when the chlorine used to disinfect the water reacts with other organic matter existing in the water. 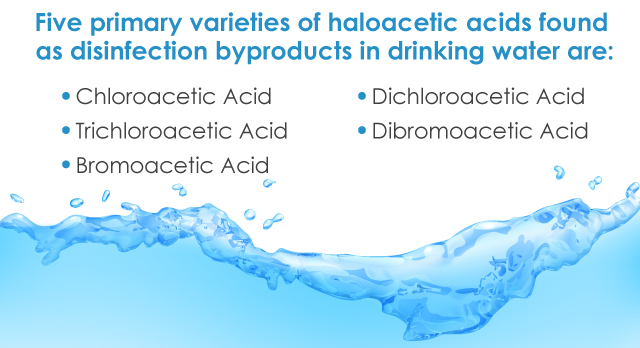 In addition to a variety of natural factors affecting water quality, such as:

The formation of Haloacetic acid byproducts can also be influenced by the following:

Stage One of guidelines established by the EPA in conjunction with other government agencies between 1998 and 2002 required monitoring of Haloacetic acids in tap water throughout the entire water distribution system and not solely in select locations. Stage Two, established in 2006 for compliance in 2012-2016 tightened regulations in the interest of protecting the public. To further protect individuals from these contaminants, the NSF created 2 different standards for drinking water filters. The first is NSF/ANSI Standard 42 which certifies that a filter removes chlorine from water. The second is NSF/ANSI Standard 53 which focuses on the treatment of DBP’s such as haloacetonitriles (haloacetic acids).


Bromates form when naturally occurring bromides found in source water interacts with ozone added to public water as a disinfectant. It can develop in drinking water in these ways:


Exposure to bromate is unlikely to be significant for most people.

According to the New York State Department of Health, adults who drink approximately two-quarts of water daily (assuming the water meets the standard of 10 micrograms per liter) would only increase their risk of cancer by two in ten thousand.

However, the state warns women of childbearing age and children may experience increased risks related to long-term exposure to bromates in drinking water.


Chlorites and chlorates are disinfection byproducts created using chlorine dioxide for disinfecting or controlling the odor or taste of drinking water. Chlorine dioxide is also commonly used to remove iron and manganese as well as colors from the water.

This decomposition occurs quickly in treated water – especially in alkaline situations. 70 percent of the chlorine dioxide used to treat drinking water converts to chlorite, which ferrous iron or sulfite ion oxidations can remove.

While the level of chlorites and chlorates in drinking water are not currently mandated or regulated, there is strong speculation with the next regulatory determination by the EPA they will be. Despite the lack of mandates from the EPA or WHO on maximum contaminant levels for chlorates, the Canadian government has established a guideline of one mg/L. The WHO has a guideline for chlorate in drinking water of 0.7 mg/L.

What Are the Risks Posed by Disinfection Byproducts?


With more than 600 DBPs identified, and many believed to be unidentified, it is very difficult to determine their long-term risks to public health. However, long-term exposure to some known disinfection byproducts is believed to increase risks for a variety of negative health consequences, including:


The WHO has identified chloroform and bromodichloromethane as possible human carcinogens.  The National Institutes of Health reports exposure to drinking water disinfection byproducts, such as trihalomethanes, has been linked with colorectal and bladder cancer in humans.

Additionally, the EPA studied trihalomethanes specifically in regards to their impact on liver and colon cancers, finding trihalomethanes did the following three things:


The state of New Hampshire warns small increases in the incidence of bladder, colon and rectal cancers have been associated with the presence of chloroform in drinking water.


There have been reports in scientific literature linking disinfection byproducts with birth defects, fetal developmental delays and miscarriages as well as to “adverse developmental or reproductive effects in humans” with some studies indicating a link between high levels of trihalomethanes in drinking water and early-term miscarriages.

When it comes to haloacetic acids, reproductive issues of testicular damage has been reported in rats after a single dose of dibromoacetic acid or multiples doses of dichloroacetic acid.


According to the New Hampshire Department of Environmental Studies, chronic oral exposure to chloroform at high doses can harm your heart, liver, kidneys and central nervous system.

Ingesting large amounts of bromates can create symptoms similar to those that disinfectants added to public water seek to reduce, such as:


The final three typically occur with the ingestion of high concentrations of bromates. There are some concerns people with preexisting kidney conditions may be more susceptible to the side effects of bromates.

In other words, the problem is much bigger than a simple case of residual chlorine in drinking water possibly affecting the smell and/or taste of the water you drink. The EPA studies on trihalomethanes conclude “ the carcinogenic activity of even a binary mixture of chemical carcinogens is difficult to predict.” Since we can’t quantify the risks, it is best to seek solutions eliminating the risks.

Why Do Public Drinking Water Companies Continue to Use Chemicals With Hazardous Byproducts?


You would think if so many government agencies around the world are aware of the potential risks of disinfection byproducts they would eliminate chlorine’s use. So, why do water companies providing drinking water continue using chemicals that create these harmful byproducts in their disinfection processes?

Various governmental and health organizations have made great strides to limit exposure to the general population through regulations, recommendations and mandates. The goal is to ensure drinking water is clean and safe without leading to adverse, albeit unintended, ill-effects.

Some water treatment organizations in the U.S. have made a move to chloramine for disinfecting drinking water. While there are still some disinfection byproducts created by this method, and they are generally fewer than those associated with other chlorine disinfectants, the majority of disinfection byproducts created by chloramines is unknown.  Chlorine remains the dominant disinfectant used in water companies throughout the United States.

What Can You Do About Disinfection Byproducts?


As an environmentally-conscious consumer and health-conscious homeowner, you now have some power to control your family’s exposure to drinking tap water contaminated by disinfection byproducts.

One of the most important things you can do for your home, your family, and to reduce your risk of exposure to potentially harmful contaminants in your local drinking water supply is to invest in a high-quality water filtration system for your home.

As you’ve learned in this report, it isn’t just the water you drink that can have an adverse effect on your health. It is also the water you use from your faucet for cooking, making tea, showering, washing your hands and bathing your pets posing potential issues.

It’s important to limit your exposure at every turn and this means filtering water throughout your home, and not just from taps where you will get the bulk of your drinking water.

A few key takeaway points about disinfection byproducts in your drinking water are:

Contact us today and do something to make a difference in the level of disinfection byproducts in your water. Install a Multipure water filtration system in your home. Systems are available for point of use as well as your entire home. They offer filtration and purification, so you can drink, cook with or bathe in your water with confidence that it’s good for you and your family’s health.