Some contaminants found in tap water can be hazardous because they are carcinogenic — they can cause cancer if you ingest them. Let's take a closer look at some of these contaminants and how drinking water filtration systems help keep you healthy.

The Dangers of Tap Water — Carcinogens

Carcinogenic materials get into our water supply in various ways. They can be present in runoff from industrial or agricultural operations, or they may leach out of landfills or other areas with high concentrations of contaminants. They may seep into the water as it passes through mineral deposits containing hazardous materials.

Municipal wastewater treatment plants often do not have effective ways to filter out all carcinogenic materials, so these can make their way into the treated municipal water flowing into your home.

People who drink tap water containing carcinogens are likely to see their cancer risk rise over their lifetimes. One study, published in the journal Heliyon in 2019, found that even tap water that seems safe may harbor dangerous carcinogens.

In the study, the Environmental Working Group reported that 22 carcinogens commonly found in tap water — including arsenic, radionuclides like uranium, and byproducts from water disinfectants — likely cause more than 100,000 cancer cases over a human lifetime, even though the water supply meets the current legal levels.

How Carcinogens Cause Cancer

Carcinogens generally cause cancer by altering the DNA in our cells or changing our cellular metabolisms.

The carcinogens that change our DNA cause mutations that disrupt the usual processes in our cells. Some other carcinogens leave our DNA intact, but they cause cells to divide at a much faster rate than usual. This accelerated division increases the likelihood of DNA changes and mutations.

Several substances and exposures are capable of changing our DNA:

The International Agency for Research on Cancerclassifies materials according to their carcinogenic effects, using these four categories of carcinogenicity:

Various carcinogens increase cancer risk differently. Some can cause cancer after a small amount of exposure, while others cause cancer only after extensive, prolonged exposure. Additionally, a person's risk from a given carcinogen depends on numerous factors, including the type of exposure, the length and intensity of exposure, and genetic factors.

In tap water, what causes cancer? Until relatively recently, we did not know carcinogens were so prevalent in tap water. Now, we have strong evidence of several carcinogens in tap water. Scientists identify new carcinogenic contaminants every year, and the number will likely continue to grow. Only about 7% of the 3,000 high-volume chemicals used commercially have undergone safety testing, so new discoveries are likely.

In the future, we may well discover evidence of additional carcinogens that we are unaware of today, or research may confirm that some substances we now only suspect may cause cancer are definitively carcinogenic.

Below are some of the most common carcinogens detected in tap water.

The World Health Organization calls arsenic the most significant chemical contaminant in drinking water around the world. Contaminated water used for drinking, irrigation, and food preparation poses the most severe public health threat from arsenic. Long-term exposure to arsenic can cause skin, lung, and bladder cancer, and arsenic links to cardiovascular disease and diabetes, which are on the rise in the United States.

In the United States, arsenic contamination is a particular challenge in the Southwest. High arsenic levels are typical in the crystalline and volcanic rock in these areas. Low precipitation rates and the high evaporation rates caused by heat also mean aquifers recharge very slowly. The stagnant water in these aquifers undergoes prolonged contact with the arsenic in the surrounding rocks and soil, absorbing high arsenic concentrations over time.

One U.S. Geological Survey study found that 16% of the drinking water wells in the Southwest contained arsenic levels that exceeded the legal maximum contaminant level determined by the Environmental Protection Agency.

Arsenic contamination of well water is also prevalent in some areas of the midwest, Great Lakes region and east coast.

Lead may seep into drinking water when outdated lead pipes corrode. Lead contamination is most likely when the water has high acidity or low mineral content, both of which can lead to corrosion. Lead is particularly problematic because it can bioaccumulate — it stays in the body over long periods.

The U.S. Department of Health and Human Services has classified lead as reasonably expected to be a carcinogen. The EPA and the International Agency for Research on Cancer have classified it as a probable carcinogen. In lab studies, exposure to high levels of lead has correlated with an elevated risk of all types of cancer, especially cancer of the brain and spinal cord, lungs, respiratory tract, larynx, stomach, and intestines.

Aside from being a carcinogen, lead can also cause developmental issues in children. These effects include behavior and learning problems, hyperactivity, low IQ, neurological symptoms, anemia, hearing difficulties, and slowed growth. The EPA has concluded that there is no known safe level of lead in a child's blood.

Radioactive materials like radium, uranium, radon, and thorium occur naturally in mineral deposits in the Earth's crust. When groundwater comes into contact with these deposits, it absorbs the radioactive substances. The Environmental Working Group reports that approximately 165 million people across the United States get their drinking water from a source containing radioactive materials.

Exposure to radium primarily causes bone cancer, though it can also cause cancer in other areas of the body. Other radioactive materials can cause cancers of the kidneys, liver, lungs, skin, thyroid, and stomach.

The U.S. National Institutes of Health and EPA have classified some byproducts of common disinfectants as known and possible carcinogens.

For example, the chlorine used as a disinfectant in many municipal water systems can react with organic and inorganic material to form trihalomethanes. The most common trihalomethane is chloroform — others include bromoform, dibromochloromethane, and bromodichloromethane. Disinfectants can also interact with organic and inorganic matter in the water to form carcinogenic haloacetic acids.

Exposure to these byproducts can cause different types of cancers, including liver and bladder cancer.

Some U.S. cities have now switched from chlorine to ozone or ultraviolet (UV) disinfection for water treatment at the plant. Unlike chlorine, these treatments will not react to form carcinogenic byproducts. However, even with the use of ozone or UV disinfection, chlorine is often added in the distribution system to prevent microbial growth after the water has left the treatment plant. As of 2017, according to the American Water Works Association, about 70% of survey respondents asked about their municipal disinfectant use continued to use chlorine. About 20% used chloramine, which is chlorine with ammonia added. Less than 7% of respondents used ozone, UV treatment, or other methods.

PFOA and PFOS are colloquially known as "forever chemicals" because they do not tend to break down over time. These human-made chemicals typically make their way into the environment from industrial manufacturing processes and firefighting foam. They are prevalent in products like these:

PFOA and PFOS often get into drinking water when runoff or leachate from chemical plants reaches municipal water sources.

According to the EPA, exposure to PFOS and PFOA over certain levels can cause cancer, particularly kidney and testicular cancer. It also likely causes several adverse non-cancer-related health effects, including liver damage, thyroid changes, cholesterol changes, inhibited antibody production and immunity, and developmental issues in fetuses and infants.

Groundwater Sources Are More Likely to Have Carcinogens

One reason for this difference is that groundwater tends to move through Earth's crust very slowly. As it creeps through rock and soil, it has much more time to collect contaminants. On the other hand, surface water tends to move faster, and it undergoes more agitation. Rivers rush swiftly along, and wind and rain cause movement in lakes and ponds.

Groundwater systems also sometimes draw their water from surface water sources. Water from various lakes, rivers, and streams might eventually end up in an aquifer by seeping through the ground or traveling through plants' root systems. Each lake or river may contain relatively few carcinogens. However, as the contaminants from those individual sources collect in the groundwater system, they may become more concentrated.

Another reason for the difference is that the rocky layers of the Earth's crust naturally contain certain carcinogenic materials, such as arsenic and radionuclides, that can easily dissolve into the groundwater. Surface water is less likely to come into contact with these underground contaminants.

Additionally, water sources in drought-prone areas often have higher carcinogen levels. As water levels in drought-stricken areas fall, the carcinogenic contaminants become increasingly concentrated. They then have the potential to cause more harm when the water reaches municipal water supplies.

Some locations in the United States face more challenges with carcinogens in their tap water than others. Let's take a look at a few of those places, so you'll know where you need to take extra precautions to protect yourself and your family.

The Benefits of a Home Drinking Water System

Fortunately, you can keep many harmful carcinogens out of your home's tap water with a high-quality drinking water filtration system. A tap water filter from Multipure protects against numerous harmful contaminants to keep you and your family safe. We offer several options, so you can choose the drinking water system that works best for your home, region, and budget.

Is Your Tap Water Safe to Drink? Make a Difference With Multipure

A superior home water filter can reduce the concentrations of many contaminants in your tap water, including various carcinogens. It helps protect your family's health by providing clean, safe water to drink.

When you're ready for dependable tap water solutions, let Multipure help you bring safe, clean drinking water into your home. Contact us today to learn more about how installing a tap water filter can protect your family from contaminated water. 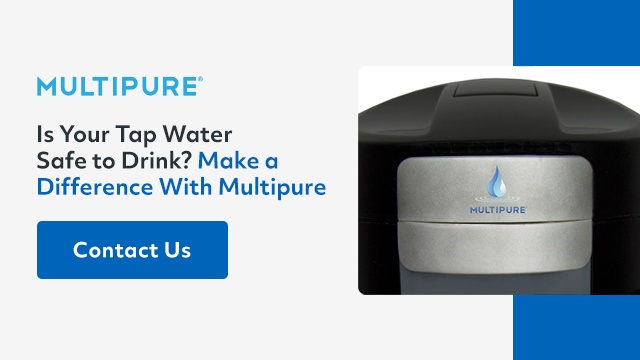